See also the recent NOTICE OF THE SCA AGM TO MEMBERS
The AGM is free but numbers are limited. Please register now on Eventbrite.

SCA Chair Jane Landy writes: Back in the chair plus arrivals and departures

It’s less than a year since our last AGM (4 October 2021) and Skerries and the world seem to be very different. An end to all Covid restrictions since March 2022 has meant that those committees who rely on holding in-person events have been able to get back to business. Back in September who would have thought that we would be welcoming people fleeing from war-torn Ukraine to our town? (See skerriesca.com/Ukraine for more.) And I find myself (an SCA old-timer) “back in the chair”, which is as enjoyable and fulfilling as ever!

END_OF_DOCUMENT_TOKEN_TO_BE_REPLACED

Once upon a time, there was a thriving CoderDojo in Skerries. Ninjas (youngsters) aged 7 to 17 met once a month for a busy, creative Sunday afternoon in the Little Theatre. Skerries CoderDojo was both part of the overall CoderDojo organisation and a committee of the Skerries Community Association. We had lots of fun, as you can see from this post from 2015.

Ninjas grew up, mentors and champions moved on…

And now there is hope that we can find people who are ready to start Skerries CoderDojo anew! There are still some funds in the coffers. All that’s needed is a handful of parents / mentors were to come forward!

I myself was the Champion of the group (as the person sort of leading it is called) from 2014 to 2017. As I’m involved in other things, I won’t be able to be part of the new CoderDojo committee again, but am happy to help and would host and attend a first Zoom call to explore possibilities.

Monthly CoderDojos (October 2015 to June 2016) continue to be in demand, particularly with beginners, although there is a bit of a fall-off in the advanced groups. Still, we barely find enough mentors to offer the spaces that there is demand for! Due to lack of availability of rooms in May & June, we did not accept any new coders after April.

We offered Scratch coding for beginners and intermediate; a small but hardcore html group; Minecraft Modding and then Unity (game design) for the oldest group. Over the last year, the Scratch Intro lead mentor had to leave, and the gap she left is felt; now, the Scratch Plus lead mentor has to end his involvement as well.

Very successful: Mentors encouraging children to present their projects to the group. Didn’t get to the next stage, where ninjas would present to the entire Dojo – we have started the process of obtaining projectors (follow-up needed with the Community Centre).

Within the Skerries Community Association, of which Skerries CoderDojo is a committee (as well as being part of the CoderDojo movement), we participated in the Chairs’ and Committee Meeting in June (Karen Flannery, Deirdre Kelly). This was very useful for forging new connections and for letting the other committees know what it is that we are doing.

We are also present on the SCA website and were included in the annual report; one of our mentors (Tony Graham) is a Director of the SCA

Equipment: Over the last year, we bought four laptops which can be booked via the Eventbrite system. This is an important step towards inclusion, enabling families which do not have a laptop at home to attend, and also offers families with more children than laptops to sign up more than one child. We have also been successful in obtaining five Raspberry Pis from the CoderDojo foundation.

Mentors and Helpers: A number of new mentors and helpers joined us over the last 12 months, thank you to those who joined & those who continue to help out, CoderDojo would not exist without you! The Garda Vetting Process has been carried out for the first batch of mentors and helpers, and will be offered again in the near future. A good number of our mentors and helpers have attended Child Protection Training, either offered by the CoderDojo foundation or Skerries Community Association, and those who did so strongly recommended attendance to other mentors. Keep your eyes open for announcments of new

Scratch Training for new mentors was last offered in 2015, and should be offered again soon.

Outlook: We need a firm Lead Mentor for each group, who will themselves find a replacement if they cannot make it; a treasurer for Jan 2017, and a new champion for summer 2017 (or earlier, if someone has come to the decision to take this very rewarding job on now).

Karen Flannery, our treasurer, presented the figures above.

Overall, income from the very popular Tuck Shop is strong, whereas donations have gone down, possibly because parents spend that bit extra on the Tuck Shop. It may, however, be a good idea to make parents more aware of the donations box.

The meeting thanked Karen for her wonderful services as treasurer, which she will continue to carry out until the end of the year; from January 2017, Máire Goldsmith will take over. Thank you, Máire!

Skerries CoderDojo write: Our monthly coding club for kids from 7 to 17 was in session two weeks ago, and here are a few pictures taken during it. The ninjas were showing off their projects to their group – part … Continue reading →

The volunteers of Skerries CoderDojo (one of the many committees of Skerries Community Association) made it possible once more – over 70 “ninjas” (young coders) attended the monthly CoderDojo (or computer-coding workshops) in our Old School last Sunday, 8 March 2015. 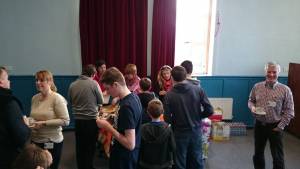 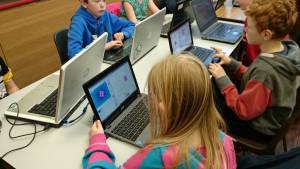 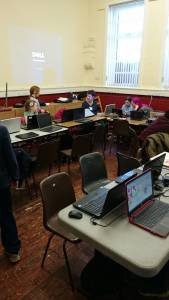 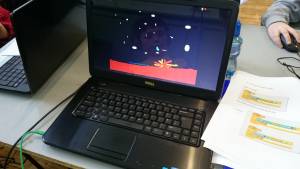 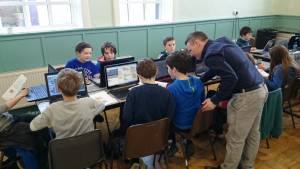 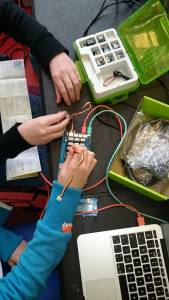 There are some 30 mentors and helpers involved in this project, all giving their time free of charge. Thanks to their main sponsor, RazorSocial (based in Rush), their venue is paid for for the moment, but there are many other costs to cover, such as mentor training,  child protection training, materials and (some) equipment (they borrow as much as possible).

Normally, sessions take place on the second Sunday of the month. Every month, tickets for this free event can be reserved. It is safest to book them on the Sunday before the event, when they go live at 5 p.m., as there can be waiting lists. An email to coderdojo@skerriesca.com is all it takes to be put on their mailing list & to be alerted in good time before the next session!

Once a month, Skerries CoderDojo meet for a free coding club. At the December Dojo, conveniently moved forwards to the 30th of November as not to clutter up the Christmas Period too much, more than 60 Ninjas were mentored by a dozen … Continue reading →

Skerries CoderDojo, the free, volunteer-led monthly coding club for kids from 7 to 17 (and their parents), is going from strength to strength. After two meetings in the lovely upstairs of Joe May’s, that venue became too small, and they have now taken over the Old Schoolhouse (part of Skerries Community Centre), where they will be found one Sunday every month from 4 p.m. to 6 p.m. 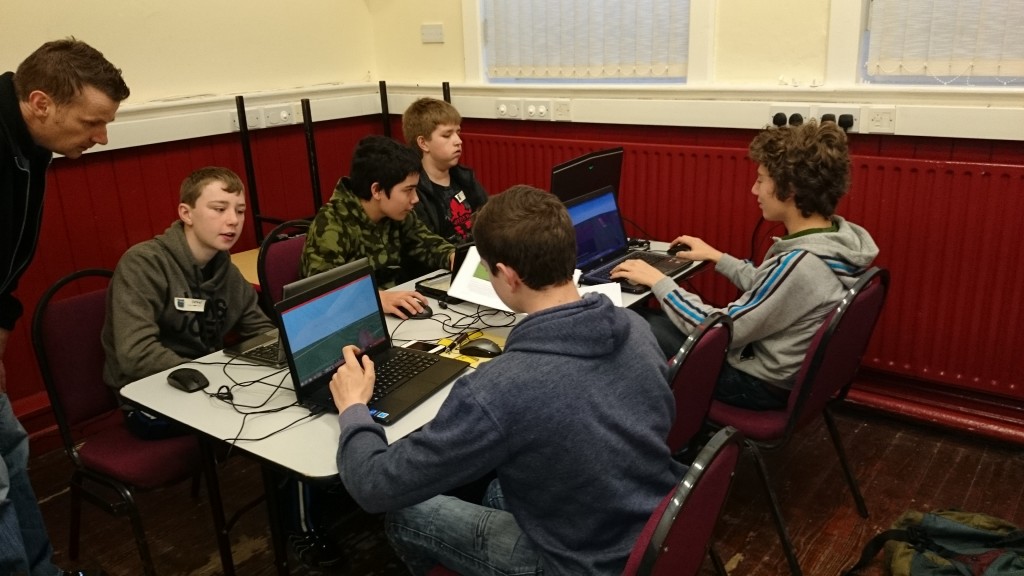 Now they need more mentors so they can continue coaching the young computer enthusiasts and fill all the space they now have at their disposal. If interested, please contact Sabine at coderdojo@skerriesca.com – you will be offered training if necessary. At the moment, the club is using Scratch and JavaScript. Additional Parent Helpers / Organisers are also welcome. 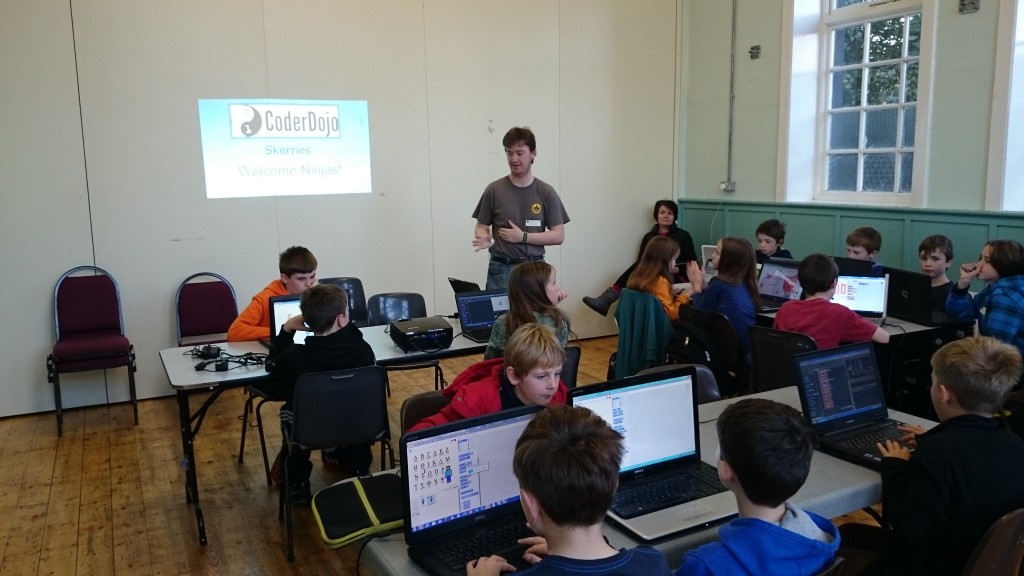 One of the advantages of being in the Old Schoolhouse is that the volunteers can now set up a Café Dojo, where parents (who have to stay on the premises if their children are under 12) can sit and chat and have some coffee / cake. What a lovely way to spend a Sunday afternoon! 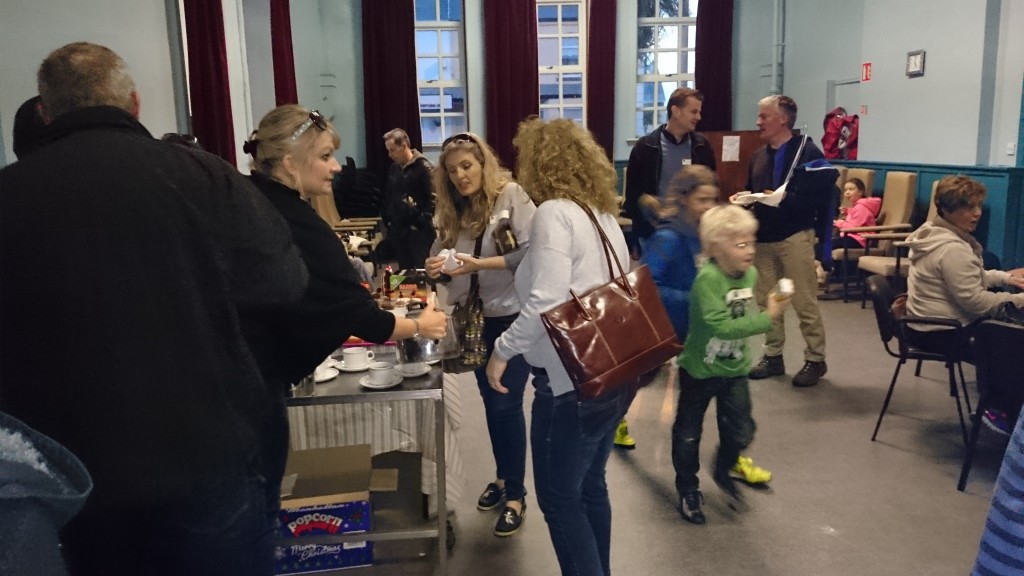 While the club is free to attend, ninjas (participants) must book in and bring a laptop, and a parent if they are under 12. Bookings for each CoderDojo opens a week before  the event and is done online only, through the Skerries CoderDojo EventBrite page.

Skerries CoderDojo would like to thank their main sponsor, Ian Cleary of RazorSocia.com, a Rush-based company / website of international renown that evaluates social media tools. 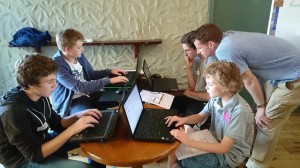 The newest Skerries Community Association committee, Skerries CoderDojo, had a great start to its monthly free computing-club sessions. Their aim is to bring interested young people aged 7 to 17 and mentors who have a computing / coding background together. The buzzword here is Digital Literacy, the ability to not just use computers but to understand how they work, and to write your own computer programs. 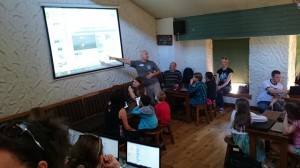 The organisers, helpers, and mentors numbered more than a dozen, and the interest in Skerries for this monthly event is huge. The venue could hold 30 “ninjas” (which is what CoderDojo participants are called) – it could have been filled twice over, and the (free) tickets were snapped up within twenty minutes. 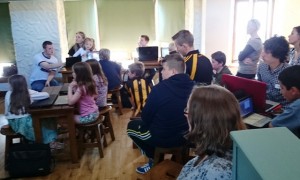 If anybody would like to join the group of mentors / parent helpers / organisers, they can send an email to coderdojo@skerriesca.com. And if you would like to get a ticket for the October meeting, scheduled for Sun Oct 5, 4 p.m. to 6 p.m., then you need to keep an eye on the daily SCA Newsflash email – that, and the SkerriesCoderDojo Google Group (which you are invited to join)  is where you will first learn when next month’s tickets are released. 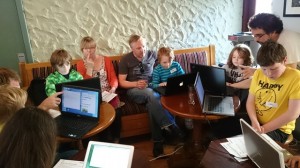 What was particularly good from your point of view?

“The number of mentors available and the expertise. Also, the kids were having such a great time”

“It’s a fun environment, yet the children really learn something in a constructive way”

“The buzz in the room, community spirit. ”

“An opportunity for “screen-time” with other kids … what’s not to like. My beginner child feels so enabled now – great for self esteem”

Skerries Community Association is delighted to be helping Skerries CoderDojo to get established and would like to thank all the mentors, organisers, and helpers for their efforts. Best of luck to you for the future!