This year, the annual report about the work of the Skerries Community Association and its committees will not be distributed to every household in Skerries. A limited number of printed copies will be available in the Community Centre, in local shops, in the week before the AGM (4th October 2021) and on request by email to chair@skerriesca.com.

Click on the thumbnail below to see the full report with turnable pages.

And if you’d like the links to be clickable, open the PDF here:

Skerries Cycling Festival 2021: How it turned out

Skerries Cycling Initiative’s first cycling festival took place on 22 August. It was a lot of fun and definitely something to build on it, going forward. We started off the day – a lovely one weatherwise – with a 5km and a 25 km cycles from Skerries Mills carpark. People of all ages and abilities, just as we hoped for, took part. This was to be a day for celebrating cycling as a healthy normal way of getting around, whether by you chose a simple one speed bicycle or something sleeker.

Undoubtedly the most eye catching and eyewatering entrant was Robin of Donabate’s  Alpha-7 Velomobile, seen below as he chats with Brendan Grimes and Dermot Higgins.

END_OF_DOCUMENT_TOKEN_TO_BE_REPLACED

A festival to celebrate the Freedom Machine!

The good news: There will be a one-day Skerries Cycling Festival, even though the four-weekend Skerries Summer Festival had to be cancelled for 2021.
Skerries Cycling Initiative (SCI), part of Skerries Community Association, with support from Fingal County Council and Skerries Mills, is holding its first ever cycling festival and invites you invites you to come along.

The Skerries Cycling Festival will be all about encouraging people to integrate more active travel into their daily lives so that they can enjoy the fun and other benefits of cycling.

END_OF_DOCUMENT_TOKEN_TO_BE_REPLACED

Skerries Cycling Initiative is a committee of the Skerries Community Association and a member of Cyclist.ie, the national cycling advocacy network. We welcome the Greenway development as a means of improving active travel in the area and encouraging modal shift.

END_OF_DOCUMENT_TOKEN_TO_BE_REPLACED

This year, the annual report about the work of the Skerries Community Association and its committees will not be distributed to every household in Skerries. A limited number of printed copies will be available from 10/10/2020 in the Community Centre, in local shops, and on request by email to chair@skerriesca.com.

Click on the thumbnail below to see the full report with turnable pages.

And if you’d like the links to be clickable, open the PDF here:

Where will our bikes take us from now on?

Now that society has begun to open up a bit again, wouldn’t it be great if some of those more positive things that happened in the last few months continue? I’m thinking of the fact that there are now so many more people out on bikes and walking. People nipping down to the village on their bike. Families out together for a spin. Cycling has become so much more normal, it is great. And is it just Skerries, or is there more mutual respect between road users everywhere?

The challenge now is to keep the momentum going and build on this increase in cycling!

This is where Skerries Cycling Initiative could play a truly important role – especially if you help us in this!

END_OF_DOCUMENT_TOKEN_TO_BE_REPLACED

Our activities over the last year or so included: 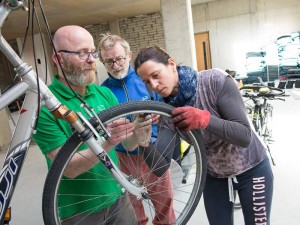 Bike repair and maintenance course. Ten people attended the bike repair and maintenance course we organised at the Well Fit gym premises at  Skerries Shopping Centre over six mornings in May. It was initiated by Skerries Tidy Towns with funding  by Fingal County Council and the Department of the Environment under the Local Agenda 21 programme. Bike mechanic Paul Callan from The Rediscovery Centre, a social enterprise based in Ballymun, conducted the sessions. All participants enjoyed the course and now feel confident about tackling bike repairs.

The Rás End Stage street party and the fine weather gave SCI a great opportunity to talk to people about improving cycling infrastructure in and around Skerries. The need for a safer cycling route between Skerries and Balbriggan came up many times. People really want to see this happen soon.
We were delighted  that twenty eight  new subscribers signed up to our email Newsletter on the day. To receive it yourself, just send an email to cycling@skerriesca.com.

Bike Week Fun Cycle. Our Midsummer Madness Fun Cycle on 21 June was a trip around the town and local housing estates exploring lesser known paths and laneways as well as Town Parks, the Ballast Pit path and Distributor road. We returned from Barnageera Cove via the coast road and finished with a picnic at The Seapole.

Submissions to FCC. During the last year we made submissions on 30 km/h in residential areas, cycling in Town Parks and the draft County Development Plan. We continue to press for the completion of the cycle track from Balbriggan to Skerries, and for greater awareness of the importance of cycling to a number of areas, including the development of tourism in Fingal.

Cycling on South Strand As a group working for better cycling facilities in Skerries we had mixed feelings about the proposal to ban cycling along the South Strand path. However we are convinced, having heard many accounts of accidents involving walkers and cyclists that the path is not suited to adult cycling given the potential for conflicts with other users. However, Fingal County Council accept that young children, properly supervised by a parent, may cycle on the path.