Skip to primary content
Skip to secondary content
Joyeux Noel et Bonne Année !
Skerries Town Twinning Association had a busy year in 2014 celebrating the 20th anniversary of the twinning with the Canton of Guichen.  In August we welcomed 41 visitors and we were most grateful to all the local families who hosted the visitors.  Also to the many individuals and associations who helped us with the organisation of the events in the 5-day visit. 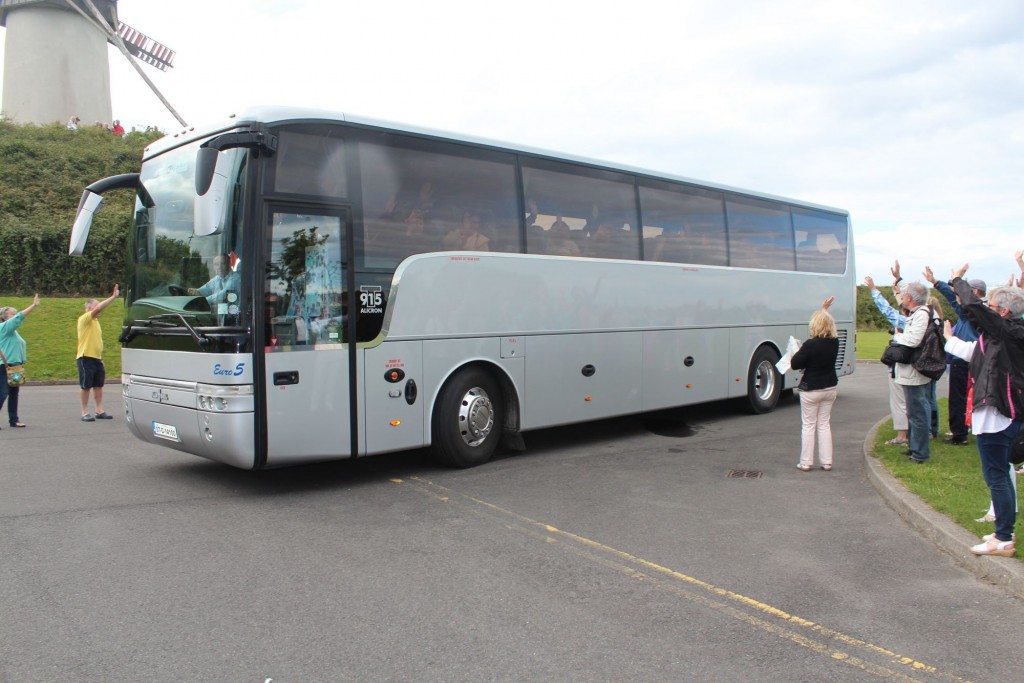 We look forward now to a return trip in July 2015 to celebrate the twinning link in the Canton of Guichen.  We will keep you all informed of plans.
We have also been invited to send three young people ( +16) to take part in an international work camp In Laillé, also during July.  This will be a very exciting project and we will be getting started on recruiting the participants in the New Year. 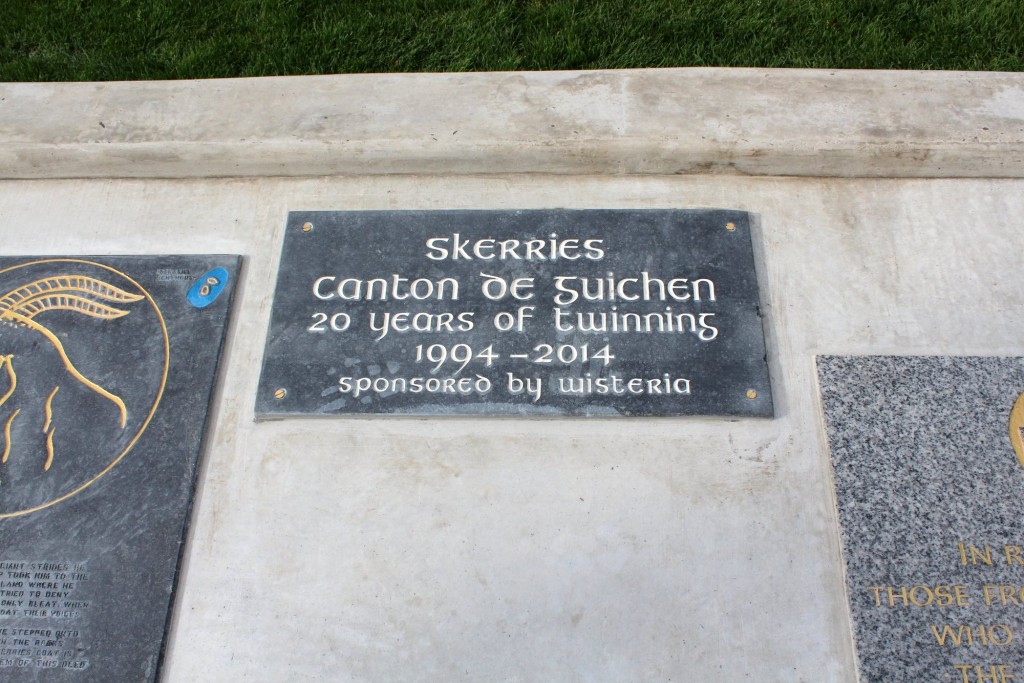 We will be holding our annual Dinner at the end of January, Saturday 24th in The Rockabill restaurant and hope to contact all our members and friends before then with final details. 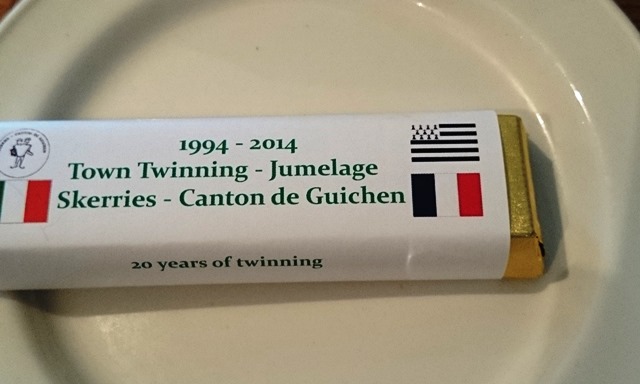 Skerries Town Twinning Association, part of the Skerries Community Association, looks back on a very successful visit from France which marks the 20th anniversary of the first visit from Guichen! 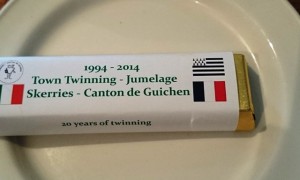 Fond farewells, warm hugs and  kisses on both cheeks  were the order of the day on Tuesday afternoon last, when Skerries hosts bid  ‘au revoir et bon retour’ to the 41 guests who had come to Skerries from the Canton of Guichen.  They were here to celebrate the twentieth anniversary of the twinning of the two areas.  It seemed like no time since the visitors had arrived to blue skies, but, right on cue, the first rain of the five days fell, as they departed. 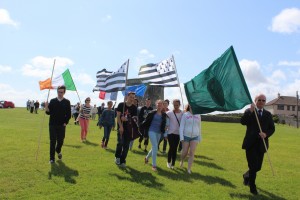 During their stay, the visitors, young and old, had packed in an eventful time.  On Friday morning, the adults of the group had guided tours of Ardgillan Gardens and the Castle, while the younger visitors were warmly welcomed to the Cúl Camp in Skerries Harps GAA.  In the afternoon the adults among the group had guided walking tours of Skerries, and the kids had a Treasure Hunt around the town.

Friday evening saw the official opening of the joint photographic venture, called ‘Through Each Other’s Eyes’ – photographers from Guichen and Skerries having photographed each other’s landscape and people.  The opening was performed by Councillor Grainne McKenna, deputising for the Mayor of Fingal.  There was a large crowd from across a broad spectrum of local people, many of whom had been among those who had welcomed the original visitors twenty years ago.   Many of the photos were quickly sold, a tribute to the high quality of the works.  Others photos were on display in Seasons, Rockabill, Parachute and The Plough restaurants. 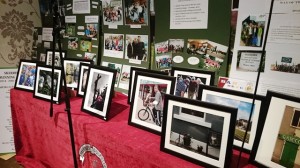 On Saturday, an illustrated talk on ‘Twenty Years of Twinning’ took place in Keane’s Bus Bar and Skerries Town Twinning Association was pleased to welcome representatives from Rush, Loughshinny, Balrothery and Lusk Twinning Associations who spoke of their experience of having a twin town.  On behalf of the Canton of Guichen, Philippe Gourronc, Jean-Paul Gachot and Jean-Paul Quéré made  contributions to the discussion which followed the talk.  Meanwhile a drama workshop occupied the younger folk. Workshops on Celtic embroidery, set dancing and traditional music were also organised.  An evening of music and song, by young Skerries artists took place in Café Jacques to round off a busy day.

At Mass on Sunday, there were French, English and Irish readings, followed by a display of Breton music and dancing outside St. Patrick’s Church, before a colourful parade set out for Guichen Way ( on Red Island), where despite the strong breeze, a beautifully engraved piece of Milverton granite commemorating the twentieth anniversary was unveiled and the twinning promise of friendship and cooperation was renewed.  This plaque was kindly organised and donated by Wisteria Garden, Strand Street.  This plaque will be incorporated into the new Town Garden, beside the Library, when it is completed. 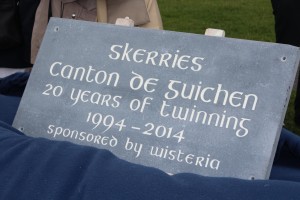 On Sunday afternoon a hotly contested Boules tournament took place at The Dorn.  Eight teams were formed (each comprising French and Skerries participants).  After several rounds of heats, the winners, aptly named ‘The Goats’,  narrowly defeated ‘The Bears’ amid much fun and laughter and a fine air of competitiveness.  A return match is promised in Guichen next year, when a group will travel for the twentieth celebrations there.    A special Dinner was held on Sunday evening in Skerries Golf Club.

Bright and early on Monday morning, the Guichen group, accompanied by three Skerries members set out for a day-long excursion to Kilkenny.  It was an excellent day, the weather held up and there was an enjoyable guided tour of St. Canice’s Cathedral, with many of the group climbing the Round Tower, followed by a picnic and tour of Kilkenny Castle.  A little retail therapy followed and all were glad to climb aboard the bus for the return trip to Skerries.  A final evening of singing and music was held in Joe May’s and despite the weariness which was beginning to creep in, a very lively session took place, with Skerries and Guichen singers and musicians contributing in turn to the entertainment.

Finally, for the brave-hearted, a quick trip to Dublin took place on Tuesday morning, before packing of bags for the return trip via Rosslare.

The five day visit was a great success and plans are already afoot for the return in July 2015.  Huge thanks must go to the host families and the many individuals and organisations, who gave so freely of their time and energy to make the trip such a success.  If you would like to see more photos, follow us on Facebook or contact any of our members – jcoleman467@gmail.com, bnfriel@gmail.com or staffordmar@eircom.net 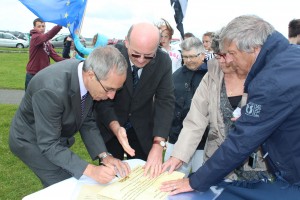