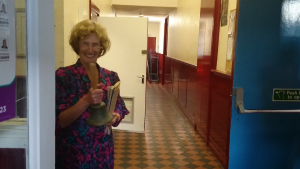 What a fantastic turnout for the Old School Centenary Celebrations on Tue 26 August 2014 – there was admiration all around for Mary Conway, one of the Directors of Skerries Community Association, and her team for putting together this very enjoyable and highly informative evening! Memorable contributions include Heather and Fay McGloughlin, who read letters from school girls from 1914 and 2014, and Ashling Coleman, who gave a rendition of two lively songs, accompanied by Noreen Gavin.

However, at the heart of the evening was Stephanie Bourke, chairperson of Skerries Historical Society , who gave a paper on the history of the Old School. The many former pupils of the school who had come to the night listened attentively as she outlined the history of the building, and followed her detective-like analysis and conclusions of the Role Books of the St Patrick’s Schools for Boys / for Girls while they were resident in what is now the Old Schoolhouse. Many of the photographs and the original paper on the school building are printed in Time & Tide 5, still available from Skerries Historical Society, who you can find on Facebook – or in the Bus Bar on every 2nd Tuesday of the month for their public meetings. 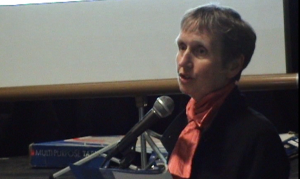 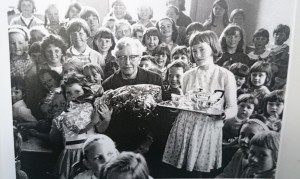 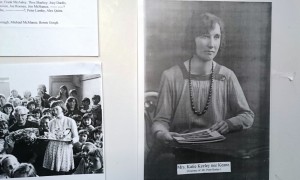 Hugh Halpin had put together 20 snippets of memories from those who had attended school there, and those were much enjoyed by all, very engagingly read out by Adam Burke, himself a teacher – and a member of Skerries Theatre Group, one of the many who were in attendance on the night. 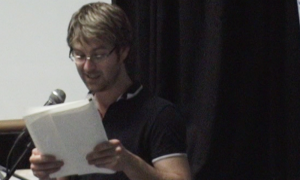 Afterwards, there was much chat and banter, and the fascinating exhibition that was put together for the day was poured over, names guessed and stories exchanged. Many expressed the hope that the photographs would be exhibited again, and for longer than for just the one night – Skerries Community Association shares that hope! 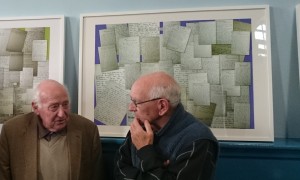 The organisers were especially delighted that more than thirty former pupils came back to the place where they got their primary education for this special night. The photograph below shows most of them – at the centre in the group photo, and below, Jack ‘Jackser’ Coleman, just back a few months from living on the other side of the globe, who was a pupil here in 1929. 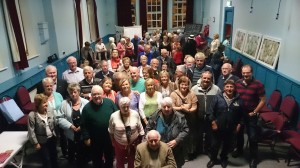 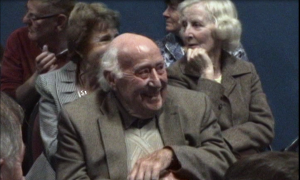 My name is Molly, it is 1914 and I am 8 years old. My new school on the Dublin Road in Skerries has caused lots of excitement around the town while it was being built – is lovely and bright because we have lots of huge windows and it is cosy because teacher lights a fire in the grate each morning with sticks, coal and turf we bring in with us.

We only get to see the boys briefly every morning and afternoon because the girls and boys have different halves of the school. I walk home for lunch every day with my two sisters and we always seem to have to sprint back to school in case we are late!

Mostly teacher is nice and helpful but if you get on the wrong side of her you could easily get a slap with her cane – I feel sorry for the girls who have been punished because it looks really sore!! Luckily I have managed to stay out of trouble so far.

My favourite thing to do is play skipping in the yard – we use some bailing twine the farmer who owns the field next door to the school gave us and we tied one end to a tree so four of us can skip together.

Every so often my hand gets tired in school practising my writing on my slate and the chalk keeps breaking into little pieces.

I like to daydream listening to the horses hooves trotting past on the street. It makes me wonder what transport people will use in 100 years’ time and what the child sitting at my desk might be like and what games they might play. I also wonder will everyday life like shopping and cooking change a lot too because right now it all seems like a lot of hard work……………………

Lots of things have changed since then, you might be surprised to know that the school building has changed very little in appearance although it is no longer used as a school anymore – it is now locally known as the Little Theatre or the Old School and is home to the local Drama society, a Montessori (which is like a combination of playing and learning for 3-5 year olds) a Day Care centre for the elderly, and local scouting groups, dance groups and meals-on-wheels (who deliver cooked dinners to elderly people around the town daily) all operate from here too.

Skerries is a much, much bigger town now and there are no less than four primary schools. The school you went to is now a mixed school for girls and boys and it’s new location is 100 yards behind your school building. We now use paper to write on and pencils to write with and we have heating systems instead of fires.

We still love to play skipping but there are lots of different activities for children to participate in. And believe it or not, with so many new inventions like cars, buses, trains and planes for transportation and computers and television for entertainment many children actually need to be encouraged to be active and to run around and play games.

The great news is that teachers are no longer allowed use canes or physically punish kids in any way.

We don’t go home for lunch anymore and school staff have to work really hard to make sure children don’t eat unhealthy foods with sugar in them. Shopping is much easier as all the shops have been rolled into one big supermarket, and for cooking we have hobs, ovens and microwaves.

I think you can see that a lot has changed over the last 100 years although we are still just plain old kids wanting to have fun with our friends.

Memories, collected by Hugh Halpin from his contemporaries

I spoke to some of my contemporaries. Here is the result, 20 memories from the old school (1950s and early 60s). Peter McNally says he will send you a few of his stories.

These memories come with a bit of a disclaimer (bear in mind the memories of these auld kids are questionable) and by the way, its not all nostalgia…

Memory 1. Blue lipped boys
Either from the cold or sucking nibs and ink from the inkwells. Health and Safety wasn’t a big thing then.
Memory 2. White lipped teachers
Not from rage, but from holding chalk between their lips as they held the easel with one hand and rubbed out the blackboard with the other. Then followed the inevitable cringe as the chalk screeched across the board.

Memory 3. Class size
Each teacher had two classes to teach and two separate curriculum…perhaps the white lips didn’t come from the chalk after all.
Memory 4. Blots
Great care had to be taken to avoid blotting a copybook. The consequences could be painful. Oh, for a biro then.

Memory 5. Mill Hill Line
The line of Cabra kids making their way to school across the Mill Hill.
Memory 6. School toilets
There were outside and so bad that anyone who lived close to the school would sneak home to use the toilet. And for a small child, reaching the chain could be daunting.

Memory 7. Ploughing lessons
Watching Ellis’s field being ploughed (where the Community Centre is now) and listening to the gulls screeching as they followed the plough. Any bit of diversion from school lessons was always welcome!

Memory 8. Heating
The profile of a teacher standing in front of the fire warming his arse while the rest of us froze. Central wha?
Memory 9. Girls
Hearing the girls playing in their schoolyard at break time. The big wall (it seemed big to us) ensured we had no contact with our female contemporaries. However if you stood on the highest step at the back door, you might just about see them on your tippy toes. The idea of the Berlin Wall probably came from our school.
Memory 10. Kids cane strategy
No matter what strategy we kids used to avoid the cane or its effects, the teachers had a better one.
Memory 11. Parking problems
None. One car was usually parked outside the school, a Ford Anglia belonging to Mr. Doyle.
Memory 12. Mammies waiting at the school gate
None, unless there was a death in the family. We were on our own and raced each other home.
Memory 13. Schoolyard fights
No cyber bullying then, it was physical.
Memory 14. McGowan’s Shop
McGowan’s was where Crilly and McGrath opticians are now. The McGowan sisters sold school supplies and sweets in big glass jars (gobstoppers, liquorice-all-sorts and such delicacies). Sometimes the sisters were diverted to the back of the shop to fetch a lined copybook. During this time, the number of sweets in a glass jar could surprisingly diminish.

Memory 15. Penny for the ‘black babies’
An expression used to help collect money for starving African children. Nothing has changed except the currency and of course the expression would be frowned upon today.
Memory 16. Short pants
All young lads wore short pants to show off the cuts on their dirty knees. Knees were only cleaned before going to mass.
Memory 17. The School Dentist
Spitting out bits of filling after a visit to the ‘dispensary’ was common. A visit to the dentist was the only time that school was preferred.
Memory 18. A bishop’s visit
Time off school in 1961 for an official visit of the recently ordained Bishop Nicholas Grimley who grew up in Skerries. It was a joyous day for the town, We were joyous for the time off.
Memory 19. The Primary Cert
One of the few times we were allowed in the girls school. It was there we sat the Primary Certificate, an exam long gone now. The sitting used to alternate between the boys and girls schools.
Memory 20. A poem on the curriculum called ‘The Crow’
Old crow, upon the tall tree top
I see you sitting at your ease,
You hang upon the highest bough.
And balance in the breeze. How many miles you’ve been to-day,
Upon your wing so strong and black,
And steered across the dark grey sky,
Without or guide or track;
Above the city wrapped in smoke,
Green fields, and rivers flowing clear ;
Now tell me as you passed them o’er.
What did you see and hear ?

The old crow shakes his sooty wing
And answers hoarsely, **Caw, Caw, Caw,”
And that is all the crow can tell.
Of what he heard and saw.