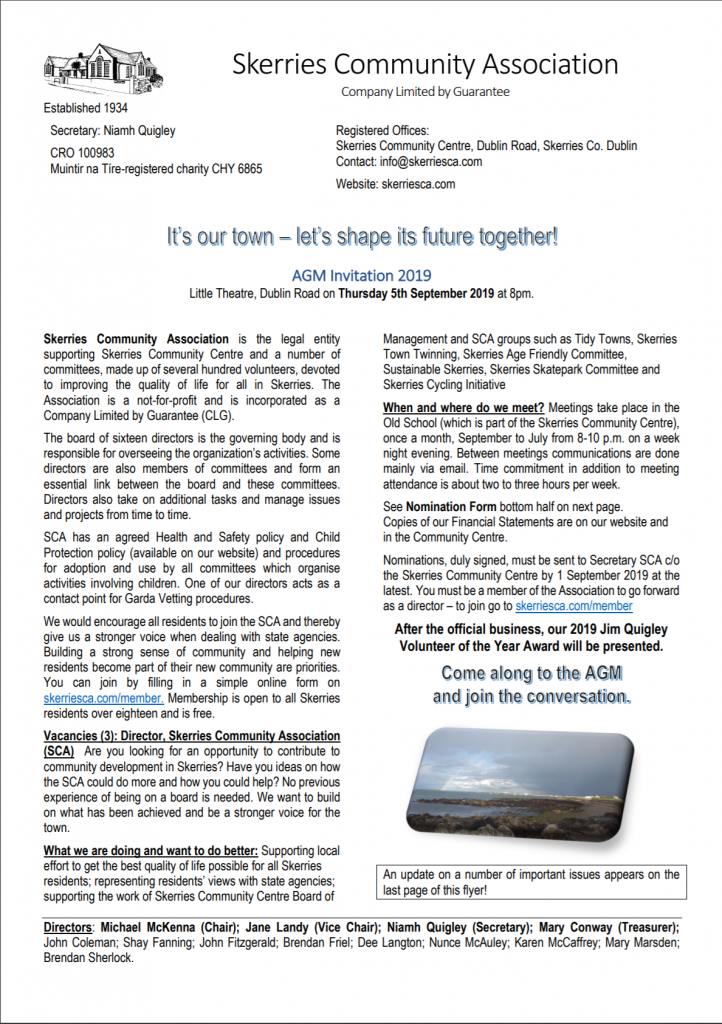 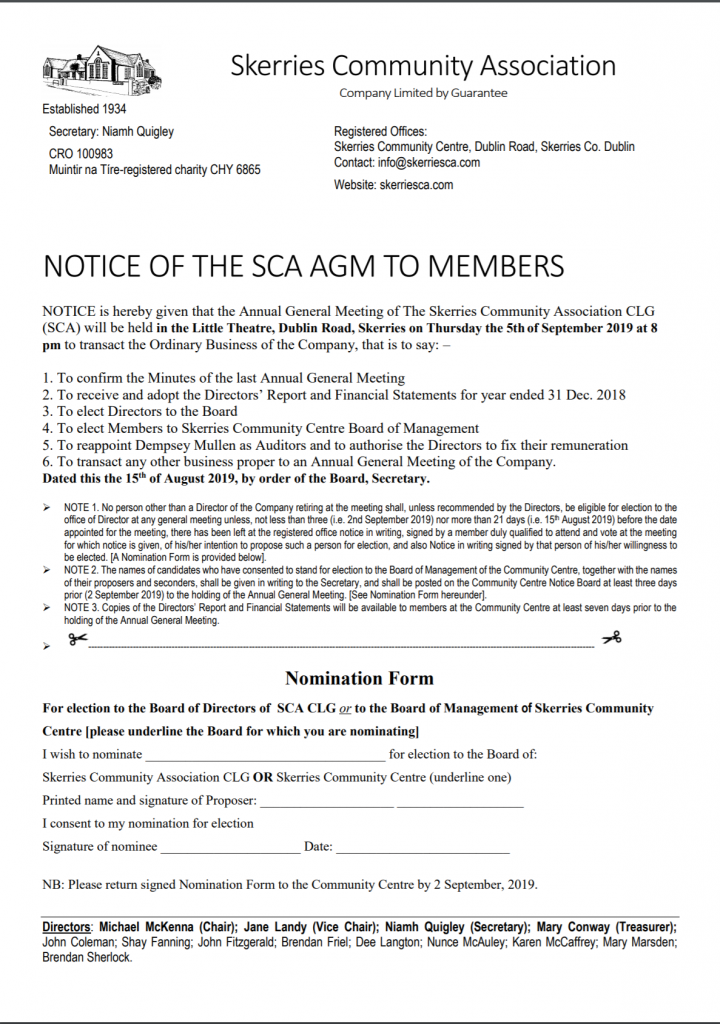 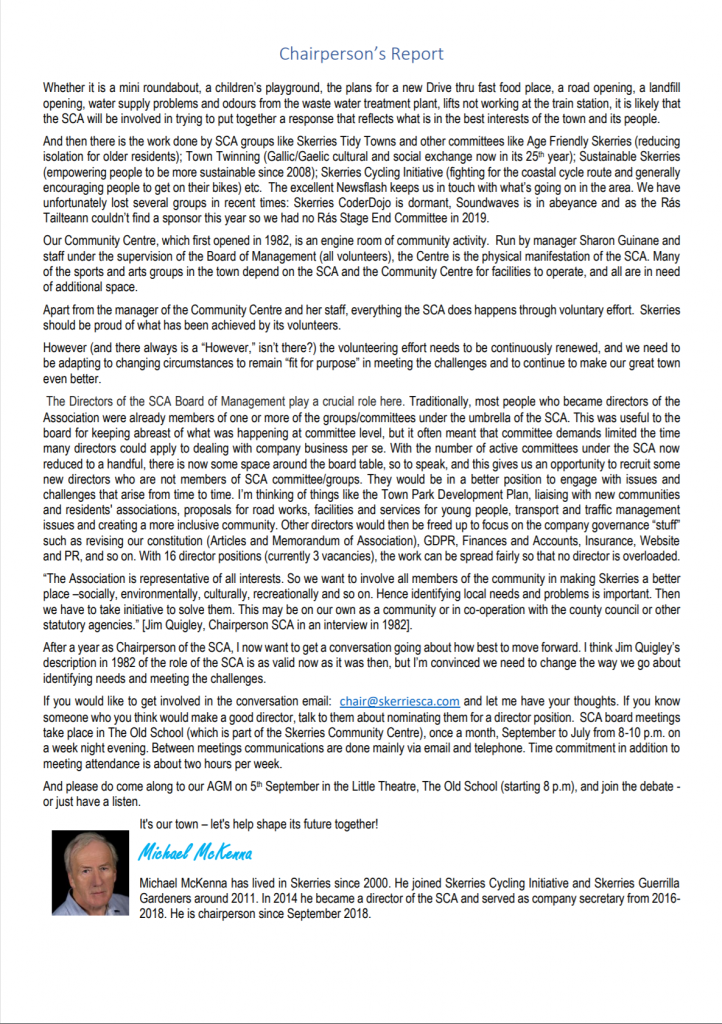 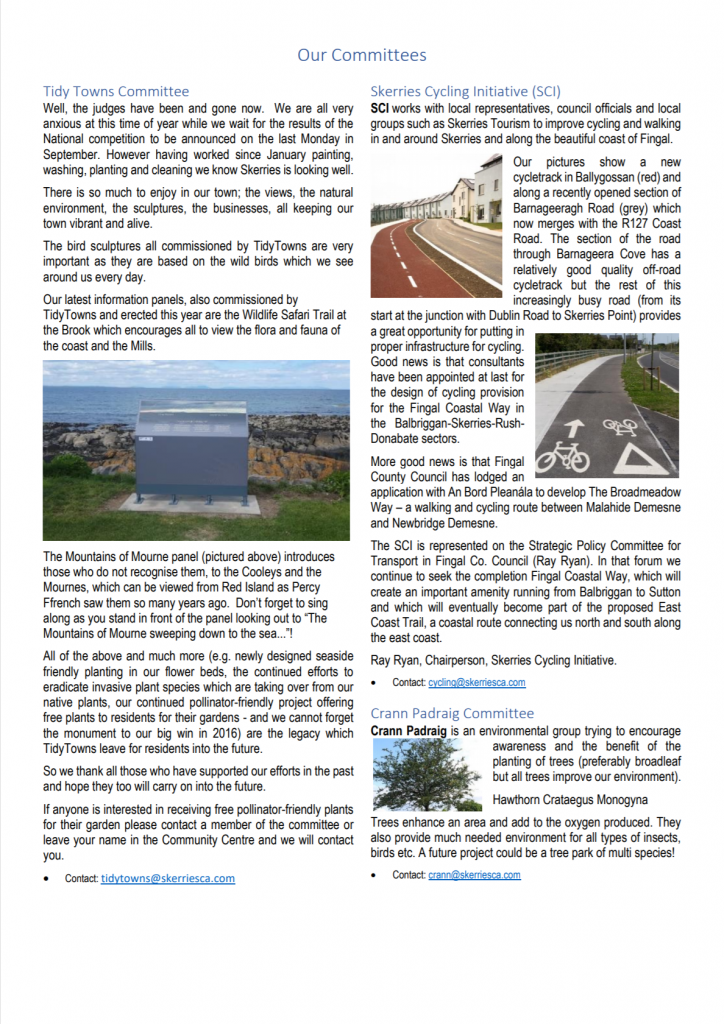 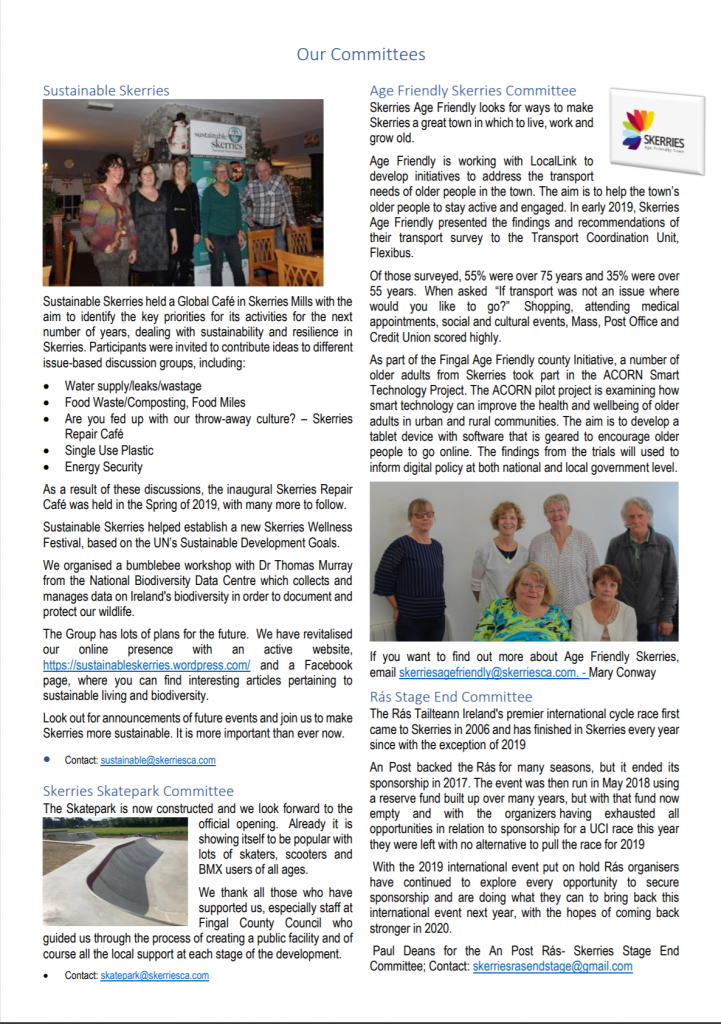 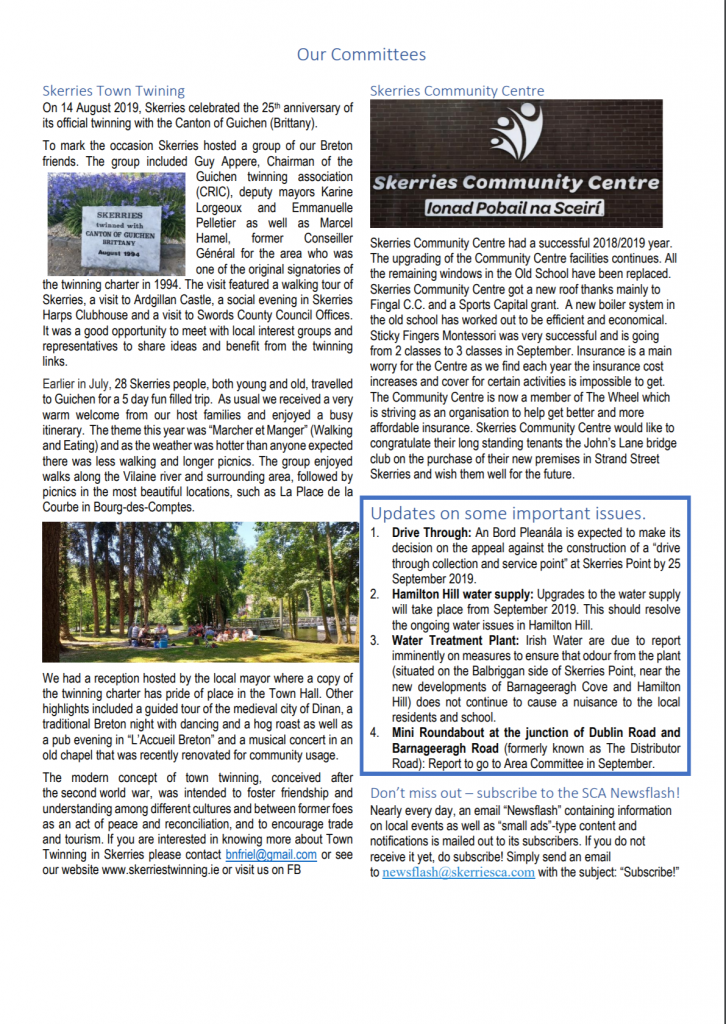 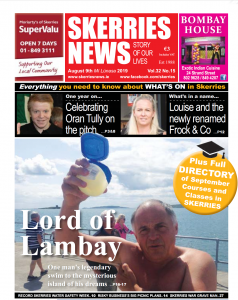 The following article was written by the SCA Chair, Michael McKenna, for Skerries News and published there in the issue dated 9 August 2019.

Whether it is a mini roundabout, a children’s playground, the plans for a new Drive thru fast food place, a road opening, a landfill opening, water supply problems and odours from the waste water treatment plant, lifts not working at the train station, it is likely that the SCA will be involved in trying to put together a response that reflects what is in the best interests of the town and its people.

And then there is the work done by SCA groups like Skerries Tidy Towns (should we ever stop singing their praises? No, we shouldn’t, especially since I am now an official litter picker under the Adopt a Patch initiative). Or other committees like  Age Friendly Skerries (reducing isolation for older residents); Town Twinning (Gallic/Gaelic cultural and social exchange now in its 25th year); Sustainable Skerries (empowering people to be more sustainable since 2008);  Skerries Cycling Initiative (fighting for the coastal cycle route and generally encouraging people to get on their bikes) etc.  The excellent daily Newsflash keeps us in touch with what’s going on in the area. We have unfortunately lost several groups in recent times: Skerries CoderDojo is dormant, Soundwaves is in abeyance and as the Rás Tailteann couldn’t find a sponsor this year so we had no Rás Stage End Committee in 2019.

Our Community Centre, which first opened in 1982, is an engine room of community activity.  Run by Manager Sharon Guinane and her team under the supervision of the Board of Management (all volunteers), the Centre is the physical manifestation of the SCA. Many of the sports and arts groups in the town depend on the SCA and the Community Centre for facilities to operate, and all are in need of additional space.

Apart from the professional manager of the Community Centre and her staff, everything the SCA does happens through voluntary effort.  Skerries should be proud of what has been achieved by its volunteers.

However (and there always is a “However,” isn’t there?) the volunteering effort needs to be continuously renewed, and we need to be adapting to changing circumstances to remain “fit for purpose” in meeting the challenges and to continue to make our great town even better.

The Directors of the SCA Board of Management play a crucial role here. Traditionally, most people who became directors of the Association were already members of one or more of the groups/committees under the umbrella of the SCA. This was useful to the board for keeping abreast of what was happening at committee level, but it often meant that committee demands limited the time many directors could apply to dealing with company business per se. With the number of active committees under the SCA now reduced to a handful, there is now some space around the board table, so to speak, and this gives us an opportunity to recruit some new directors who are not connected to SCA committee/groups. They would be in a better position to respond to the issues and challenges that arise from time to time. I’m thinking of things like the Town Park Development Plan, liaising with new communities and residents’ associations, new road layouts, facilities and services for young people, transport and traffic management issues and creating a more inclusive community. Other directors would then be freed up to focus on the company governance “stuff” such as revising our constitution (Articles and Memorandum of Association), GDPR, Finances and Accounts, Insurance, Website and PR, and so on. With 16 director positions (currently 3 vacancies), the work can be spread fairly so that no director is overloaded.

“The Association is representative of all interests. So we want to involve all members of the community in making Skerries a better place –socially, environmentally, culturally, recreationally and so on. Hence identifying local needs and problems is important. Then we have to take initiative to solve them. This may be on our own as a community or in co-operation with the county council or other statutory agencies.” [Jim Quigley, Chairperson SCA in an interview in 1982].

After a year as Chairperson of the SCA, I now want to get a conversation going with the wider community about how best to move forward. I think Jim Quigley’s description in 1982 of the role of the SCA is as valid now as it was then, but what I’m convinced we need to change is the way we go about meeting the challenges.

If you would like to get involved in the conversation email:  chair@skerriesca.com and let me have your thoughts. If you know someone who you think would make a good director, talk to them about nominating them for a director position.  SCA board meetings take place in The Old School (which is part of the Skerries Community Centre), once a month, September to July from 8-10 p.m. on a week night evening. Between meetings communications are done mainly via email and telephone. Time commitment in addition to meeting attendance is about two hours per week.

And please do come along to our AGM on 5th September in the Little Theatre, The Old School (starting 8 p.m), and join the debate – or just have a listen. About a week before that you should receive our annual flyer inviting you to the AGM and outlining what has happened over the past year.

It’s our town – let’s help shape its future together!

Michael McKenna has lived in Skerries since 2000. He joined Skerries Cycling Initiative and Skerries Guerrilla Gardeners around 2011. In 2014 he became a director of the SCA and served as company secretary from 2016-2018. He is chairperson since September 2018.

NOTICE is hereby given that the Annual General Meeting of The Skerries Community Association CLG (SCA) will be held in the Little Theatre, Dublin Road, Skerries on Thursday the 5th of September 2019 at 8 pm to transact the Ordinary Business of the Company, that is to say: –

Click the link to open the AGM notice including the nomination form: notice AGM 2019